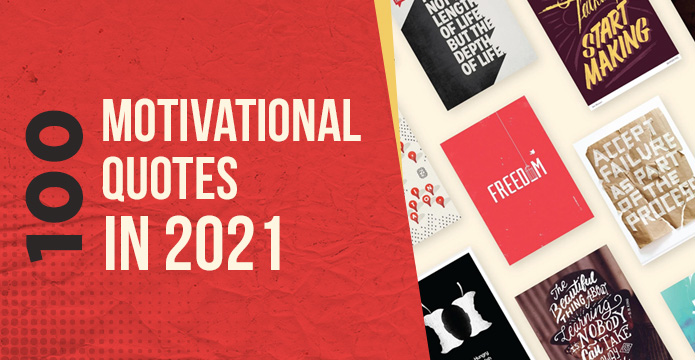 Motivational Quotes – The soul-uplifting provision for all situations.

I don’t know what it is about quotes and sayings but they spark (even though tiny) a light in my mind and heart. I believe it is the same for many of you. A few words spoken by someone gives you strength; lifts you up. They sometimes take you out of your dark and gloomy days. It happens most of the time that people rarely take action albeit they feel inspired. But that doesn’t take away the fact that many people live by certain quotes and even credit them for their success.

We need some motivation in 2021 more than ever for some obvious reasons. The pandemic unquestionably brought the worst days in people’s lives, with everyone battling the same thing. The world came to a pause not to mention that many plans came to a pause, many lost their jobs, many lost their dear ones, many lost their good health and some other unaccountable losses. To give you some strength and get you going in the year 2021, we have listed down a 100 motivational quotes which will surely lift your spirits up.

While student life is also called the golden period of your life, sometimes it becomes hard to keep oneself motivated to study. Keeping a strong focus and driving with motivation is really important for students. So here are some quotes for students, hope you find that missing motivation here.

“An investment in knowledge pays the best interest.” – Benjamin Franklin

“Education is our passport to the future, for tomorrow belongs to those who prepare for it today.” – Malcolm X

“Teachers open the door, but you must enter by yourself.” – Chinese proverb

“Learning is never done without errors and defeat.” – Vladimir Lenin

“The beautiful thing about learning is that no one can take it away from you.” – B.B. King

These days a word ‘stress’ has become a staple in the workforce. Stress and other factors leads to loss of motivation towards what you do. Well, here are a few sayings and lines by some great men and women to fill your cup of motivation.

“Either you run the day or the day runs you.” – Jim Rohn

“I’m a greater believer in luck, and I find the harder I work the more I have of it.” – Thomas Jefferson

“You’ve got to get up every morning with determination if you’re going to go to bed with satisfaction.” – George Horace Lorimer

“Don’t judge each day by the harvest you reap but by the seeds that you plant.” – Robert Louis Stevenson

“Don’t wish it were easier. Wish you were better.” – Jim Rohn

“Do the hard jobs first. The easy jobs will take care of themselves.” – Dale Carnegie

“Amateurs sit and wait for inspiration, the rest of us just get up and go to work.” – Stephen King

“Things may come to those who wait, but only the things left by those who hustle.” – Abraham Lincoln.

“People rarely succeed unless they have fun in what they are doing.” – Dale Carnegie

“You don’t have to be perfect but you do have to be 100% committed.” – Alexandria Ocasio-Cortez

We can all agree that life isn’t always rainbows and unicorns, sometimes it’ll rain and other times there will be storms which make you feel as if it’s the end. But it is really important that we learn to get ourselves out of those days and keep on living. What better way to make you feel better and motivated than with few lines by the greats.

“If you want to fly, give up everything that weighs you down.” – Buddha

“Life is like a riding bicycle, to keep balance you must keep moving.” – Albert Einstien

“The worst bullies you will ever encounter in your life are your own thoughts.” – Bruce Lee

“If You Are Working On Something That You Really Care About, You Don’t Have To Be Pushed. The Vision Pulls You.” – Steve Jobs

“If I wait for someone else to validate my existence, it will mean that I’m shortchanging myself.” – Zanele Muholi

“Your time is limited, so don’t waste it living someone else’s life. Don’t be trapped by dogma; which is living with the results of other people’s thinking.” – Steve Jobs

“When you reach the end of your rope, tie a knot in it and hang on.” – Franklin D. Roosevelt

Everybody in this world is looking for happiness whether in small things or materialistic possessions. As we live, we encounter some inevitable hardships and sometimes our mind creates chaos. During those times it is important that we look for light and try to resume back to path in search of happiness.

“The key to being happy is knowing that you have the power to choose what to accept and what to let go.” – Buddha

“Be happy not because everything is good, but because you can see good in everything” – Dodinsky

“If it won’t matter in 5 years, so don’t spend more than 5 minutes worrying about it.” – Shannon Torrens

“Happiness is not something ready-made. It comes from your own actions.” – Dalai Lama

“True happiness is to enjoy the present, without anxious dependence upon the future.” – Lucius Annaeus Seneca

“When one door of happiness closes, another opens, but often we look so long at the closed door that we do not see the one that has been opened for us.” – Helen Keller

“Being happy doesn’t mean everything’s perfect. It means you’ve decided to look beyond the imperfections.” – Anonymous

“For every minute you are angry you lose sixty seconds of happiness.” – Ralph Waldo Emerson

A strong mindset is key to achieving your goals ultimately leading to success. Whenever you feel weak in the mind feel free to go through these quotes by some of these icons.

“Everything you can imagine is real” – Pablo Piccasso

“Stay committed to your decisions but stay flexible in your approach.” – Tony Robbins

“Football is football and talent is talent. But the mindset of your team makes all the difference.” – Robert Griffin III

“Self doubt kills more dreams than failure ever will.” – Suzy Kassem

“The biggest wall you got to climb is the one you build on your mind.” – Roy T. Bennett

“Your life is as good as your mindset.” – Anonymous

“Either I will find a way or I will create a way but I will not create an excuse.” – Anonymous

“Man is made by his belief. As he believes, so he is.” – Anonymous

“There will never be a right time. Stop waiting and start doing.” – Anonymous

Achieving success doesn’t come overnight – except for some. It is very important that you set some goals in order to get ahead in life. If you are finding it hard to set goals and achieve them here are some quotes to get you motivated.

“The harder you work for something, the greater you feel when you achieve it” – Anonymous

“Keep your eyes on the stars and your feet on the ground.” – Theodore Roosevelt

“Set a goal that makes you want to jump out of your bed.” – Anonymous

“Setting goals is the first step in turning the invisible into the visible.” – Tony Robbins

“If you want to be happy, set a goal that commands your thoughts, liberates your energy and inspires your hopes.” – Andrew Carnegie

“Our goals can only be reached through a vehicle of a plan, in which we must fervently believe, and upon which we must vigorously act. There is no other route to success.” – Pablo Picasso

“I think goals should never be easy, they should force you to work, even if they are uncomfortable at the time.” – Michael Phelps

“It’s important to set your own goals and work hard to achieve them.” – Yuichiro Miura

“It must be borne in mind that the tragedy of life doesn’t lie in not reaching your goal. The tragedy lies in having no goals to reach.” – Benjamin E. Mays

Change is inevitable and equally crucial. It leads to growth and takes one out of stagnancy. So, don’t fear change and if you sometimes feel doubtful about some changes read the quotes below.

“Don’t be afraid of change, it is leading you to a new beginning.” – Joyce Meyer

“A wise man changes his mind, a fool never will.” – Spanish proverb

“You will find that it is necessary to let things go; simply for the reason that they are heavy.” – C. Joybell. C

“Change is painful but nothing is as painful as staying stuck somewhere you don’t belong.” – Mandy Hale

“Change is the law of life. And those who look only to the past or present are certain to miss the future.” – John F. Kennedy

“We often miss opportunity because it’s dressed in overalls and looks like work” – Thomas A. Edison

“Inspiration is a guest that does not willingly visit the lazy.” – Tchaikovsky

“The best way to get something done is to begin.” – Anonymous

“Idleness is only the refuge of weak minds.” – Philip Dormer Stanhope

“Excuses are merely nails used to build the house of failure.” – Anonymous

“The lazier the man is, the more he plans to do for tomorrow.” – Norwegian Proverb

“Too many young people itch for what they want without scratching for it.” – Thomas Taylor

Our whole lives we have been taught to look at failure as a lesson and get up stronger. But it is easier said than done but, it is during those are the times we need to keep ourselves motivated more.

“Failure is one of the keys to success.” – Thomas Alva Edison

“Don’t fear failure — not failure, but low aim is the crime. In great attempts, it is glorious even to fail.” – Bruce Lee

“The secret of life is to fall seven times and to get up eight times.” – Paulo Coelho

“Failure happens all the time. It happens every day in practice. What makes you better is how you react to it.” – Mia Hamm

“Success is most often achieved by those who don’t know that failure is inevitable.” – Coco Chanel

“Failure is only the opportunity more intelligently to begin again.” – Henry Ford

“I can accept failure. Everyone fails at something. But I can’t accept not trying.” – Michael Jordan

“It’s fine to celebrate success but it is more important to heed the lessons of failure.” – Bill Gates

After happiness, success is the next thing human beings chase. Or vice versa. Whatever it is it cannot be denied that it is one of the most important aspects of life so here are a few lines by some of the most successful people this world has ever seen.

“The only place where success comes before work is in the dictionary.”- Vidal Sassoon

“Success is how high you bounce when you hit the bottom.” – George S. Patton

“Success doesn’t just find you. You have to go out and get it.” – T. Scott McLeod

“Don’t stop when you’re tired. Stop when you are done.” – David Goggins

“If you want to be successful, find out what the price is and then pay it.” -Scott Adam

“Behind every successful man there’s a lot of unsuccessful years.” – Bob Brown

“The biggest challenge after success is shutting up about it.” – Criss Jami

“Success is the child of audacity.” – Benjamin Disraeli