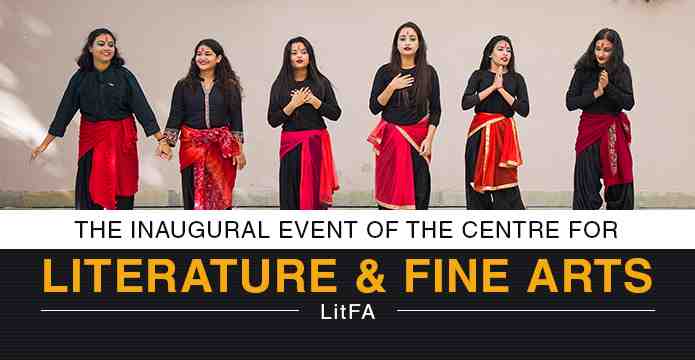 There’s something very special in the air at this time of the year. A crisp autumn breeze, crackling log fires, and bristling leaves floating delicately towards the ground inspire many people to celebrate the picturesque beauty of this season. So, on 31st of October 2019, at Inspiria knowledge campus we observed the inaugural event of the Centre for Literature and Fine Arts (LitFA) with the celebration of the beauty of autumn. The event was organized by Inspiria’s Centre for Literature and Fine Arts. The event started with great excitement and everyone in the audience was in a cheerful and enthusiastic mood. A cultural event bringing all the flavors of autumn together on one stage was hosted by Shalini Gupta and Sejal Upadhyay from BMS Department, semester 1.
The lighting of the lamp was done by our Honorable Head Academics Mr. Indrajit Chatterjee, Sherry ma’am (Co-ordinator, Dept. of BBA), Steffi ma’am (Co-ordinator, School of Media Sciences) and Anjani sir (Co-ordinator Department of Hospitality Management). The program started with the blessings of Lord Shiva in the form of Shiva Taandava performed by Sneha and Group. The next performance was in the form of a quartet of poems, recited by the budding poets of Inspiria (Dipyaman from BCA semester 1, Sejal and Aritra from BMS semester 1). By reciting self-composed poems in four languages Nepalese, Bengali, Hindi, and English, to the accompaniment of guitar, they created one mesmerizing long lyrical poem eulogizing autumn. Their poems depicted various shades of autumn influencing our life. Describing the beauty of autumn in four different languages (English, Bengali, Nepali, and Hindi) their quartet of poems touched the hearts of audiences from varied linguistic backgrounds and made them think what autumn means to them. Through their recitation, they stated that ‘Autumn is a ray of hope, between life and death’ and that ‘it is that time of the year when we live without any fear.’ After this performance, a musical recitation on autumn as the festival was done by Somjeet (BMS,1st year), who through his expressions and words made us all realize the true beauty of this season. Autumn is the end which has a new beginning. Though the leaves are shed, still they give us hope for a new spring when flowers shall bloom again! After the mesmerizing recitation, came an impromptu solo number sung by Aryendra Khan (BMS 1st yr) to the accompaniment of guitar and keyboard, played by Ashis Gurung and Surya Roy. The next performance was a drama based on Ramayana. The drama showcased a less highlighted episode of the Ramayana which is known as “Akal bodhan” in which Ram invokes Devi Durga to make him stand strong against the mighty King of Lanka Raavan, who had captured Sita. The drama was scripted by Aritra Chowdhury and performed by Dipyaman (BCA 1st yr), Somjeet, Kalyan, Avay, Preksha (BMS 1st yr) and Sahil (F&T 1st yr). The last performance was Deusi, the traditional song chanted by Nepalese people during Tihar which is part of autumn festivities, to the accompaniment of musical instruments and dance. The performers include Sourav and Mahesh Adhikari (BBA GB 1st yr), Ashis Gurung, Jeet Bania, Aaron Singh, Surya Roy, Sejal Upadhyay, Gargi Sharma, Jeet Bania (BMS 1st yr) and Rejbin Chhetri (BHM 1st yr). The upbeat notes of Deusi uplifted the spirits of the entire crowd and students joined the singers on stage. Though the song is generally of Nepalese origin, yet everyone in the audience irrespective of their linguistic and cultural diversity danced and enjoyed its tunes. The event came to a jubilant end with this joyful song uniting everyone in its melody and rhythm. This was the end of this wonderful autumn event highlighting how differently every individual celebrates the autumn season and how it binds us together in the spirit of festivity. The multicultural, multilingual frame of the cultural event rightly communicated the message of LitFA which stands for the promotion of linguistic and cultural diversity in literary and artistic productions.