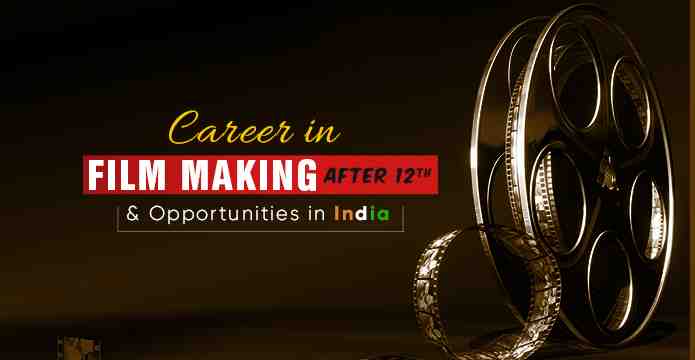 A career in Film Making after 12th and Opportunities in India

A career in Film Making is broad and ever progressing. The world perceives the domain of Film Making as the hub of glamor limelight and fame! On professional outlook, the Film Making is much more than what we think. It is something beyond the lights, rolling cameras and the perfectly dressed actors on the silver screen.

The field of Film Making comprises of a series of professions that demand tremendous hard work and dedication. You need to be physically and mentally strong and should always be prepared to withstand the challenge. The work involves working for long hours often in faraway and uncomfortable areas and situations. As a line of work, a career in Film Making expects you to be open and clear about your skill and your decision to take up the job, which requires re-training and re-skilling in a consistent basis.

The job of a producer is to make ensure that everyone else is doing their assigned tasks and responsibilities. A producer selects the story, chooses the location, recruits the cast and crew including the director, manages legalese, and so on.

A director is someone who interprets the producer’s vision. He is akin to a right arm to a producer. The entire cast and crew will have to work under the director’s command. A director looks after almost everything from the costume to choreography, from music to the entire crew. A degree from the Film Making institution supports your eligibility for the position.

The Cinematographer works closely with the director. His job demands superior technical expertise. He composes scenes for visual impression, camera angles and decides the lighting. A degree in Film Making Course provides you the best knowledge about the mentioned job.

An animator is responsible for creating the visually pleasing moving images. You need to have stable technological skills which are mostly applied in commercials, cartoons, games, etc.

The cameraman is the right hand to the Cinematographer. He should be equipped with high technical expertise and excellent knowledge of cameras.

Films are basically made in a disordered and long-drawn format. It’s the editor who puts everything in perfect flow and order. To maintain the visions intact and true, the editor has to work closely and together with the producer and the director. The editor has to analyze what scene needs the re-shot and what needs to be skipped. He takes care of the special effects and the soundtrack synchronization.

A screenwriter is someone who uses his visualization and creative talents to interpret the stories and format them for the screen. A graduate from the Film Making institution with creative writing skills or anyone who is a literature graduate can be a perfect fit for the job.

The sense of understanding and the skills of mimicry and memory is what makes a good actor. Charm and good physical attributes and a degree in acting will enhance the needed skills.

To be eligible for the course and the career in Film Making, the candidates are expected to have skills like administrative skill, excellent visual sense, team spirit, good communication skill, responsibility, creative skills to execute ideas, stamina, eye for details, and the ability to adapt. Top Employers involve- Film Studios, Production Houses, Advertising Agencies, Government Departments, Self-employment through marketing of personal skills, etc.

If you want to build a career in Film Making, and if you find a professional undergraduate course in Film Making that rewards you with a graduation degree, then don’t think twice! Just, Go ahead and enroll yourself in the course. We wish you all the best for your future!

Also Read: Are you searching for film making courses in India? Then Inspiria Knowledge Campus is the best for you.