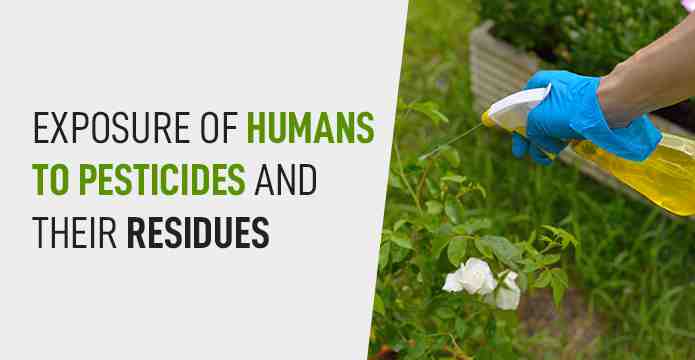 Exposure of humans to pesticides and their residues

There is much hype in our society regarding organic foods- particularly fruits and vegetables. We all are much aware of the fact that Sikkim is the first state in India to be certified as a ‘100% Organic state in the world’, and the recent ban on vegetables from outside the state (the state lifted the ban after a few months) was a much talked about topic among us and these so-called inorganic vegetables were not allowed to enter in the state because we believed that these contain pesticides.

Pesticides are chemical substances that are generally used by farmers to protect their crops from harmful insects and pests, to remove unwanted weeds that grow along with the crops, and compete with our plants for nutrients. In our country Organochlorines, Organophosphates, and synthetic pyrethroids are used against various pests and diseases of plants. These chemicals are used on our fruits, vegetables, cereal crops and also as insect repellants in our homes.

Chemicals like BHC (Benzene hexachloride) are used in household plants to drive away ants that are found to be infesting these plants. We, humans, get exposed to these pesticides either through the food that we consume, insect repellents that we use or it might also be through these plants in our garden. Besides, those people who work in the agricultural fields and different occupational settings where they are directly or indirectly exposed to pesticides by touching or breathing put at a higher risk for acute and chronic poisoning. It is always recommended to consume a balanced diet rich in fruits and vegetables.

But some of us live in fear thinking about the pesticides which might have been used in growing these crops. When a farmer sprays the pesticides only 1% of the pesticides reach the target pests while the remaining goes into our water bodies like rivers, streams, lakes, ponds, etc., which affects the aquatic organisms, particularly fishes. Residues of these pesticides have been found in fish tissues indicating the fact that these fishes may not be healthy to consume. There are numerous reports on pesticide residues in fruits, vegetables, and fish.

We generally do not know from which part of our country the rice, wheat, vegetables, fruits, fishes come from. All we have to do is to purchase it from a retailer and consume it. But the price that we are paying can have other consequences too. However, we do not know of any scientific study showing direct health benefits and disease protection from eating an organic diet. There is no evidence that organic food is more nutritious than conventional food products.

When the organic produce is available and if you have a choice to make between the two categories then obviously one should go for the organic. Even if we have purchased the vegetables grown by conventional means, one has to wash away all the vegetables properly. But proper washing does not guarantee that all the residues have been washed away.

Because of higher production costs and low productivity, the price of organic produce is always 10-40% higher than conventional produce and not many can afford them. A concern remains wherein people might eat fewer fruits and vegetables rather than pay more for organic produce.