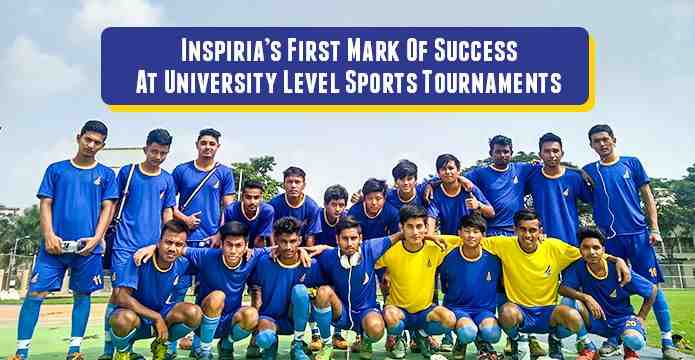 Success is not knowledge alone but resilience, determination, will power, confidence etc that grows within an individual. We at Inspiria try to inculcate all these traits in our students not only through academic growth but also by non scholastic activity. Inspiria has best understood the role of sports in the growth of a student’s life, which has helped them encourage students inclined in this field. The boon at Inspiria is the gymnasium, basketball court, football ground and the various other indoor games provided to the students.

It was a moment of pride for the students of Inspiria to be part of the MAKAUT – University level Football, Table Tennis and Chess tournaments. Even though Inspiria team has proven themselves in the home ground, it was a challenge for them to compete with professional teams of other colleges. The football tournament was held at Dr. B.C. Roy Engineering College, Durgapur and became the runners up of Zone- one comprising the districts of Jalpaiguri, Darjeeling, Coochbehar, Dinajpur (North & South ), Malda, Bankura , Birbhum and Burdwan (East & West).

Team Inspiria defeated Gupta College of Technological Science by three goals in the semifinal under the captaincy of Rajat Tirkey BHM final year student. However the final match with Asansol Engineering College, Team Inspiria with a good fight, lost by one goal. For the first timers being the runners up was like winning the trophy itself.

Members of the table tennis team Subhankar Saha ( BMS 3rd year), Raman Kumar Das ( BHM 3rd year) and Rahul Chowdhury ( BMS 1st year) reached the quarterfinals at the Inter-college table tennis tournament of MAKAUT at NSHM Knowledge Campus, Durgapur. The championship title among the colleges under Zone one was bagged by Subhankar Saha ( BMS 3rd yr) of Inspiria. Inspiria is proud of its students with such calibre.

Encouraging, motivating, inspiring the students is our utmost target for the whololistic and individual development of the students, which will help them sustain, fight and be successful in life.