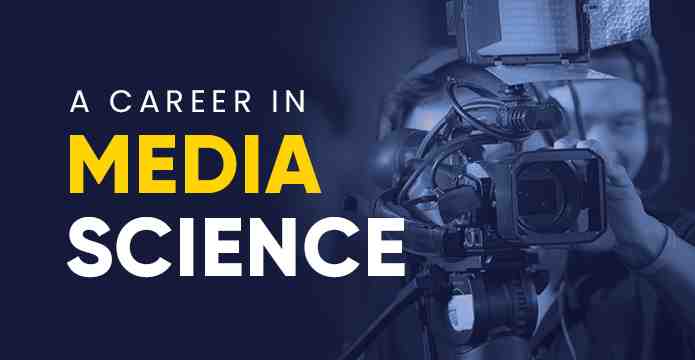 Career In Media Science: Guide On Where To Go What To Do In Print, Electronics or Digital

About a decade and half a career in media was limited to journalism, primarily in the print media. Radio journalism had limited scope in India since the government does not allow private FM broadcasters to produce news. The TV news channel boom was just reaching iuts peak. However beyond the print media, radio, TV and cinema media professionals had little scope barring a few openings in PR and Advertising. Most UG courses in the stream were called ‘Journalism & Mass Communication’ and journalists ere collectively referred to as the “Press” indicating the pronounced emphasis on the print media, mainly daily newspapers.

The advent of the digital age re-wrote the scenario beyond imagination. Journalists are now called ‘the media’ and the nomenclature ‘Journalism & Mas Communication’ has made way in most places for ‘Media Studies’ or ‘Media Science’ or \Media & Cultural Studies” and so forth.

Today the scope of someone with a media background has extended well beyond the job of a broadcast journalist. Let’s take a look at some of the numerous career options available today for a media studies graduate.

The Mass Communication / Media Studies course includes a vast array of subjects. Usually in the third year students are given the option to choose their specialized areas which could be Audio Visual Media/Print Media/ AD & PR/ Photography or Videography/Digital Media etc.

Depending on your specialization you could focus your attention to your chosen field.

If you choose the print media you could look for openings in newspapers/magazines/publishing houses where you can work as an editorial assistant or copy editor or a reporter.

If you opt for the audio visual media your talent could be utilized by TV channels including digital TV/Video producing companies where you can work as a new producer/anchor/TV reporter/ Graphic Designer/ Video editor etc.

Specialisation in Advertising & Public Relations would pave the way for a career in various positions such as ad copy writer, corporate communication executive, public relation officer in government and semi-government departments such as the Railways or PSUs like Coal India Ltd., or Indian Oil .

Photographers and Videographers can make their mark in the film and TV world though it’s a challenging task.

Digital media professionals have a growing number of options today due to a phenomenal increase in the use of the internet for marketing/education/entertainment/news broadcasting etc. There are successful YouTube channels which have more viewership than conventional TV channels and more revenue too.

Also Read: How To Become A Digital Artist

What’s more the digital platform allows you to work as an independent professional. We have young YouTubers such as Dhruv Rathee or Salony Gaur who are earning millions from their YouTube content. So if you are creative and independent you can launch yourself in the digital field with a proper media degree under your belt.