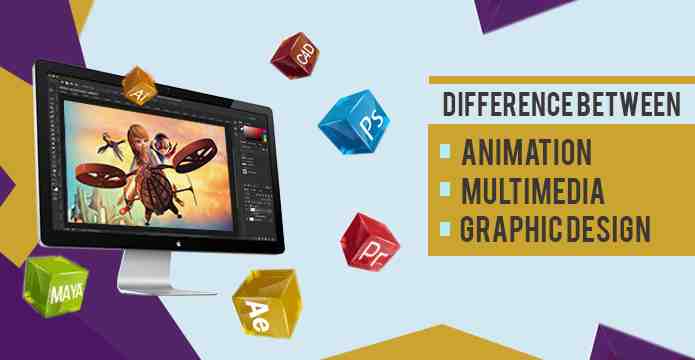 Multimedia, Animation, and Graphics act as a form of language and a technique of expression. They act as a method of rendering information through verbal and visual representations. From the age of cave paintings to contemporary age of the eye-catching and digitally represented illustrations, our world has radically evolved in regards to connecting and communicating with the majority. So, when we think about Multimedia, Animation, and Graphics, we think of a liberal and creative field with extensive use of the internet, computers, and other electronic gadgets. Although these fields are partly interlinked with each other, they, however, are not same. So, here’s the explicit explanation that will help you understand the contrast between Multimedia, Animation & Graphic Design.

Multimedia – Let’s begin with Multimedia. So what is Multimedia? Simplistically, Multimedia is anything that can be processed, stored, broadcasted, and represented through digital and technical means. It is the area or the field of specialty that involves computer-controlled or technically composed texts, images, graphics, still images and videos, audios, animation, and similar other forms of expression and information.

Oftentimes, many confuse “Multimedia” with the “traditional form of Media”, which are not similar. Multimedia vastly differs from the latter, which simply uses simplistic computer representations. Such as printed materials or text-only materials and or traditional hand-produced stuff. Multimedia, on the contrary, can be recorded, played, broadcasted, communicated with or accessed by computerized and electronic devices, and even can be a part of live production. Widely known as the “rich media” Multimedia is comparable to the interactive or communicative form of presenting the information. Here are some examples of communicative forms utilized in multimedia. They are text, audio, images, video footages, animation, interactivity, and similar as such.

Whether it’s advertising agencies, filmmaking or production houses, internet marketing firms or public relation firms, multimedia and the related technology are remodeling the production and distribution of the multimedia contents. A career in the Multimedia field can be enjoyable and rewarding. Some of the major career related to this field are listed here.

Animation – Now, let’s discuss Animation! Well, you don’t need a methodical definition for animation if you have watched the movies like “Kung Fu Panda”, “Frozen”, “Wall-E”, “Up”, “Megamind”, “Coco”, “Toy Story”, etc. The animation is a technical method that ideally brings your imaginative characters to life. To be more precise, the animation is a process that involves drawing, designing, preparing layouts, compiling & sequencing the illustrations and furnishing them a lifelike impression.

The process further involves the extensive usage of technology and advanced software gadgets. It further calls for the tremendous application of the internet along with sound knowledge in the field, expertise, creativity, and desire.

Regardless of Hollywood or Indian Film & Television Industry, the modern entertainment industry has reached higher standards due to the progress in animation and relevant fields like multimedia and graphics. From TV advertisements to designs, caricatures to the presentation, they all employ animation techniques. A degree in animation presents career opportunities in a creative and technical field. Such as production houses, advertising agencies, digital service firms, the IT sector, and so on. Few career options are listed here.

Graphic Design – Lastly, let’s cast some light upon what is Graphic Design! Graphic Design involves proficiency and creativity to create visual contents to communicate the messages and information. Such as designing and building brand logos, graphics for social media drives, etc. Contrary to the animation, Graphic Designing primarily functions on the still images and motionless visual illustrations.

In graphic design, the significant method involved is page layout techniques, implementing visual hierarchy. Graphic designers use images and typography to serve the specific requirement of the audience. They even focus on the notion of representing elements in interactive forms to enhance user engagement.

The major elements of graphic design involve – color, texture, shape, form, space, size, and line. These elements are utilized in combination or contrasting to create impactful and visually impressive designs.

Graphic designers utilize fundamentals of graphic design such as balance, pattern, proportion, emphasis, repetition, movement, rhythm, unity, and variety. Knowing about these factors and understanding “how and when” to employ these principles are necessary for creating a great design.

The rise in technology and digitization have stirred a radical change in the contemporary business arena. The virtual reality of the world wide web (www) has altered the methods of operating a business online. On top of that, the emergence of the social media platform has incited a huge rush in the social media platform. The change in notions and innovative approach to marketing, branding, and communicating the brand voice have further caused a progressive change.

Also Read: Are You Thinking to Build a Career in Animation – Then get the Full guidance Here.